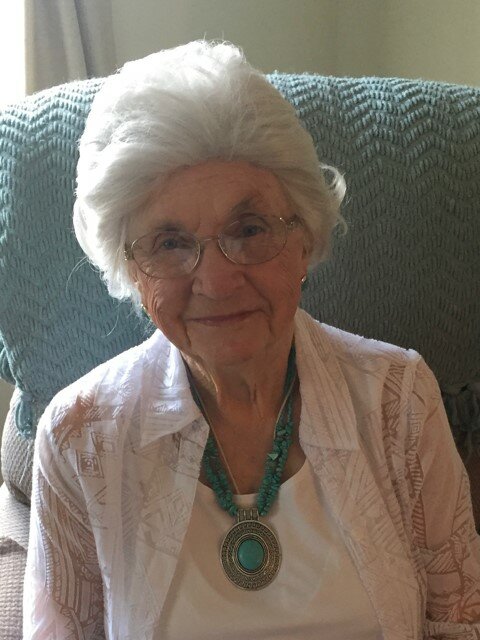 Mary Price Spencer slipped quickly and peacefully into the presence of her Lord on September 17, 2022, having influenced the lives of countless men and women of all ages over her 101 years through her Bible teaching and mentoring. Her husband of 55 years, Joe Spencer, preceded her as did her parents, Myrtle and Lloyd Price of Salina, Kansas.
Mary was born in Salina, Kansas on May 15, 1921. Although she was an only child, she was far from alone: her cousins lived nearby and the whole extended family of the Price brothers gathered frequently on the family farm or in the large grocery store they owned together. Mary helped at both places.  She could often be found driving the big combine harvester in the wheat fields, even when home from Wheaton College in Illinois.
The frequency of her visits home changed a bit when in 1946, the father of a college friend invited her to move all the way to Lynchburg, Virginia to become the director of Christian Education of the church he pastored, Rivermont Presbyterian. Leaving Kansas was unheard of in her family, let alone going all the way to the East Coast, but she did. It was there that she met and married Joe Spencer, one of the 12 siblings making up the Spencer family.  Although she had often lamented that as an only child, she would never have nieces and nephews, she needn’t have worried.  She ended up with about 100 plus or minus a few!
She spent sixty wonderful years in Lynchburg rearing their two children, teaching in Rivermont Church, and sharing life with her husband and soulmate. Together she and Joe welcomed many a visitor to their home for a meal, a retreat or an encouraging word by the fire.  She and Joe introduced the family to camping and together they explored the U.S. from Maine to Florida and Virginia to California. Later as empty nesters, they expanded their horizons to include Europe where they traveled with different groups of their friends.
In 2006 following Joe’s death, Mary moved to Charlottesville, Virginia to be nearer to her daughter. There she made numerous new friends and renewed friendships with others. She continued teaching and mentoring in her new church home, Meadows Presbyterian.
She is dearly missed by her family who include her daughter, Jane Spencer Bopp and her husband, Paul, of Charlottesville; her son, Joe Spencer Jr. and his wife, Barbara, of Matthews, N.C.; as well as grandchildren, Robbie Spencer, Katie Wright and her husband, Perry, Renn Bopp, and Chris Bopp; and her great-grandchildren, Walden and Joanna Wright. In addition numerous cousins grieve her loss especially her first cousin, Donald Price of Canby, Oregon with whom she grew up.
A viewing will be held at Diuguid Funeral Services, 21914 Timberlake Road in Lynchburg, on Thursday, October 6, 2022, from 5 until 8 p.m. A private family graveside service will be held Friday, October 7, 2022, at 1 p.m. in Lynchburg as well. A memorial service celebrating her life will be held on Saturday, October 8, 2022, at 2 p.m. at Meadows Presbyterian Church in Charlottesville.
In lieu of flowers, contributions may be made to Wycliffe Bible Translators, P.O. Box 628200, Orlando, FL 32862.
Diuguid Funeral Service & Crematory-Waterlick Chapel, 237-2722, is serving the family.

To send flowers to the family or plant a tree in memory of Mary Spencer, please visit Tribute Store
Thursday
6
October

Share Your Memory of
Mary
Upload Your Memory View All Memories
Be the first to upload a memory!
Share A Memory
Send Flowers