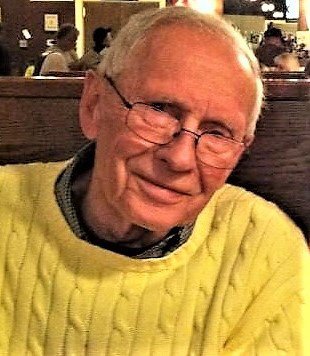 Marvin Jennings Unger, 91, of Lynchburg passed away on Friday, March 8, 2019 at Lynchburg General Hospital. He was the husband of 69 years to Frances Paris Unger. Born on April 26, 1927 in Round Hill, Va., he was the son of Guy and Golda Unger. In addition to wife Frances he is survived by his son Jay (Karan) of Ashland, Va. and daughter Elizabeth Anne (William) of Lillington, NC; four grandchildren, Amy Jones (Jeff), Jonathan White, Laura Pleasant (Brett), all of Lillington, NC and Natalie White of Fayetteville, NC, and five great grandchildren. He is additionally survived by brother Phillip Unger (Robbye) of Daleville, Va. and sister Dorothy Morcom of Forest, Va., and a number of nieces, nephews, and other extended family members who loved him. He was preceded in death by his parents and brothers Warner and Guy Jr., and sister Marie.

Marvin was a lifelong member of Centenary United Methodist Church in Lynchburg. He served in the U.S. Navy and was employed for over 40 years with National Biscuit Company originally, later known as Nabisco, before his retirement in 1989. In retirement he enjoyed numerous travels with Frances and family gatherings with his children, grandchildren and great grandchildren. He was beloved by his family and his many friends, and never met a stranger. He had a spirit of ceaseless generosity and good humor which will be missed by all.

A memorial service will be held at Diuguid Funeral Home at 811 Wiggington Rd., Lynchburg, on Friday, March 15, 2019 at 1 p.m. Visitation will be held immediately following the service.

In lieu of flowers, memorial contributions may be made to Centenary United Methodist Church, 1501 Rivermont Ave., Lynchburg, Va. 24503.

To send flowers to the family or plant a tree in memory of Marvin Unger, please visit Tribute Store
Friday
15
March

Share Your Memory of
Marvin
Upload Your Memory View All Memories
Be the first to upload a memory!
Share A Memory
Send Flowers