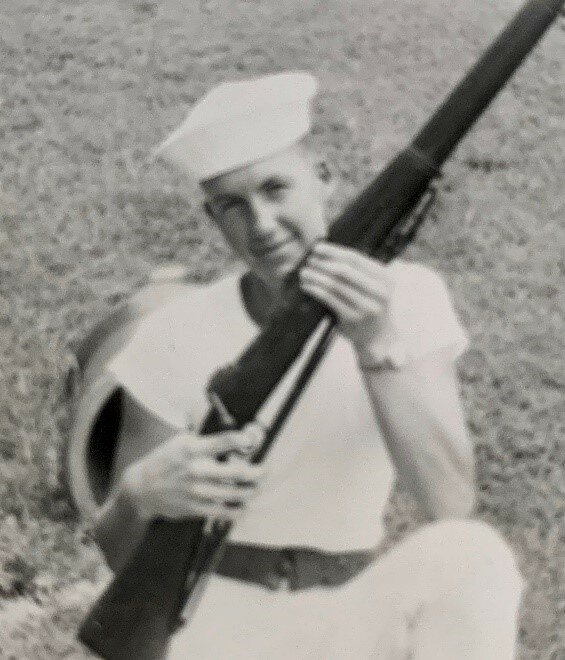 Following graduation from Matoaka High School, Dennie enlisted in the United States Navy in 1955.  He spent five years in the USN submarine division, assigned to the Norfolk-based SSR Requin, a diesel-submarine patrolling the Atlantic, Carribean and Mediterranean, as well as another three years in the Navy Reserves.  Following discharge from the Navy, Dennie was employed as an electrician by the Newport News Shipbuilding and Dry Dock Company in Newport News, VA where he worked on many of the submarines and carriers of the Navy fleet over the next 35 years.  He returned to West Virginia following his retirement and became a devoted gardener, providing his family and neighbors with more vegetables than they could possibly consume each year for the last 25 years.  In addition to gardening, Dennie enjoyed reading about history, visiting with friends, and telling stories to his family.  Also, while he enjoyed many sports, as a former baseball and softball coach he often reminisced about the golden days of our National Pastime and liked spending time at ball fields, analyzing the game wherever it was being played.

Dennie was preceded in death by his parents.  He is survived by one daughter, Melanie Hartman of Callaghan, VA (and recently-deceased husband, Rick Hartman) and one son, Darrell Howell and wife, Patty, of Lynchburg, VA; four grandchildren, Angela Trussell of Princeton, WV, William Cody Neely and wife, Dakiri, of Anderson, SC, Caitlin Neely Seaman and husband, Jake, of Woodlake, VA, and Caleb Howell of Richmond, VA; and seven great grandchildren, Logan, Alexis and Aleigha Trussell, Charlotte and Maxwell Neely, and Jude and Emelyn Seaman.  Dennie was also blessed with many special neighbors, including Johnny, Monica and Betty, and special cousin Pat and his wife Barbara.

In keeping with Dennie’s wishes, his body was cremated and his ashes will be returned to the various bodies of water where he served and lived.  There will be no formal visitation or memorial services.  Diuguid Funeral Services in Lynchburg served the family.

To send flowers to the family or plant a tree in memory of Dennie Howell, please visit Tribute Store

Share Your Memory of
Dennie
Upload Your Memory View All Memories
Be the first to upload a memory!
Share A Memory
Send Flowers