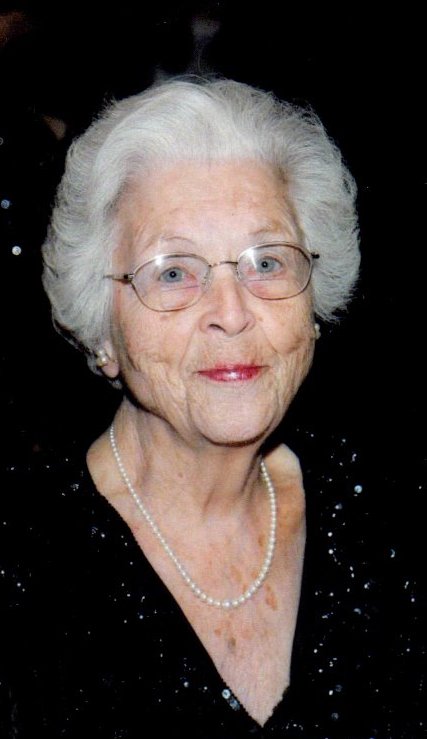 Aurelia was born on August 16, 1927, in Roanoke, Va., to the late James Dennis Jewell and Daisy Lillian Martin Jewell.  She was preceded in death by her husband, Jack Sterling Faulconer, M.D., to whom she was married to for 46 years. She was a resident of Westminster Canterbury for over 20 years.

She graduated from Roanoke College and then worked as a Medical Technologist at UVA.  While living in Charlottesville, she met the love of her life, Jack.   Aurelia and her husband were avid UVA fans.

Her husband, children, grandchildren, and great-grandchildren where truly the core of her life.  Aurelia was a strong and loving matriarch for her family.  Aurelia is survived by children, Sharon Faulconer Curtin of Lynchburg, Va., Sterling Faulconer Peters of Madison Heights, Va., and Jim (Jimbo) P. Faulconer of Lynchburg, Va. She is also survived by four grandchildren and seven great-grandchildren all of whom she cherished and adored, Allison Kieffer Reinholtz (William T. II), their daughter, Aurelia; Jennifer L. Peters, Blair Peters Payne (Brandon M.), and their children, Emma, Aubrey, and Meredith; Glenn (Pete) W. Peters, Jr. (Charity), and their children, Trace, Grace, and Griffin.

Aurelia was dedicated to the National Society of the Daughters of American Revolution serving as Honorary Regent and Registrar of the Blue Ridge Chapter, Organizing and Honorary Regent of the John Lynch Chapter, and member of the Montpelier Chapter. She was also the past State District III Director and Past State Organizing Secretary along with many other rolls and titles.  She was a member of many other local organizations and clubs.  She enjoyed volunteering as a librarian at Westminster Canterbury for 10 years.

A private family graveside service will be held at Amherst Cemetery, Amherst, Va.  We hope to have a celebration of her life at a later date held at Westminster Canterbury.

The family would like to extend their gratitude to 6th floor Drinkard at Westminster Canterbury and Senior Independence.

In lieu of flowers, the family requests contributions to be made to the Fellowship Fund of Westminster Canterbury, Peakland Baptist Church, UVA Medical Society, or to the charity of your choice.

To send flowers to the family or plant a tree in memory of Aurelia Faulconer, please visit Tribute Store

Share Your Memory of
Aurelia
Upload Your Memory View All Memories
Be the first to upload a memory!
Share A Memory
Send Flowers