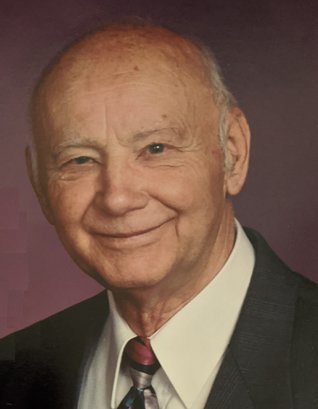 Born on January 13, 1931, in Springs, PA, to Earl W. and Rozella (Ash) Baker, he moved to Canton, Ohio, in 1950, where he was an employee of Timken Company for 39 years.  He served four years in the U.S. Air Force during the Korean War, spending three years in Europe.

It was a joyous occasion when he met Gail Tweedy of Hurt, VA, and married her on June 1, 2013.

Bernie was a member and former deacon of Liberty Baptist Church in Canton, OH. On the passing of Wanda Baker, Rev. Tom Williams named the church’s fellowship hall Baker Hall in their honor for their many years of service and faithfulness to Christ. Bernie later transferred his membership to the Church of God of Prophecy in Altavista, VA, where he continued to worship God with his wife, Gail. His children grew up seeing him read his Bible every morning, a habit he continued until his stroke three years ago.  Although the stroke greatly impaired his speech, he could pray and be understood by all.  Bernie loved people and greeted everyone with joyful exuberance.  He was well known for his big hugs, kisses and wonderful laugh.

He was predeceased by his brothers, Paul, Clark and Clifford Baker, and sister Joan Opel.

A memorial will take place in Canton, Ohio later this summer when social distancing will be a thing of the past and more than 10 people can gather together so we can celebrate the life that he lived.  His ashes will be laid to rest in Sunset Hills Cemetery next to his first wife, Wanda, in a special box made by his oldest son, Bret.

To send flowers to the family or plant a tree in memory of Bernard Baker, please visit Tribute Store

Share Your Memory of
Bernard
Upload Your Memory View All Memories
Be the first to upload a memory!
Share A Memory
Send Flowers