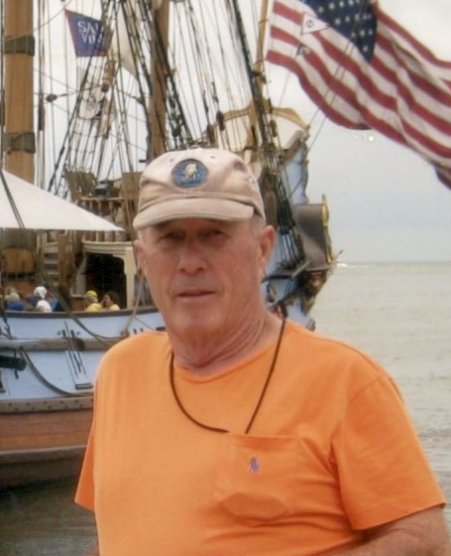 David Eugene Douthat, 80, of Lynchburg, passed away Sunday, June 23, 2019 at his home surrounded by his loving family. He was the husband of Sue M. Douthat.

Born September 21, 1938, in Roanoke, VA, he was  a son of the late Eugene Ireland and Teresa Bertelle Creasy Douthat. He was retired from his upholstery business ( Lynchburg Upholstery) where he designed custom upholstery products for a wide variety of businesses and individuals. He proudly served in the U.S. Navy as an on board licensed barber and later as a Seabee. He loved to boat and fish with his buddies, especially at the eastern shore. Additionally, he loved to play golf and was a member of Ivy Hills Golf Club. He was proud owner of a 1948 Ford business man’s coupe that he totally restored.

David was known for his generosity and willingness to go out of his way to help others.

In addition to his wife, Sue, he is survived by his daughter, Michelle Douthat, of Lynchburg; his step-son, Robert E. McDaniel (Amy) of Manassas, VA; his brother, Ritchie Douthat of South Boston, VA ; his sister, Margaret Gilliland of Lynchburg; three grandchildren, Jason Douthat, Caitlin McDaniel and Gabriel McDaniel.

The family would like to thank the Westminster-Canterbury Senior Independence Hospice staff for their loving and devoted care.

Memorial contributions may be made in Dave’s memory to the American Cancer Society, P.O. Box 22478, Oklahoma City, OK, 73123.

A memorial service will be held Saturday, June 29, 2019 at 11:00 A.M. at Diuguid Waterlick Chapel with the Rev. Catharine Montgomery officiating. The family will receive friends at the funeral home immediately after the service and at the residences later. On-line condolences may be sent to www.diuguidfuneralservice.com

To send flowers to the family or plant a tree in memory of David Douthat, please visit Tribute Store
Saturday
29
June

Share Your Memory of
David
Upload Your Memory View All Memories
Be the first to upload a memory!
Share A Memory
Send Flowers