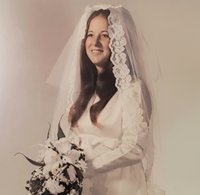 Lynn was a compassionate nurse, a lover of nature and sports, and an excellent cook. She had an uncanny ability to pick out four-leaf clovers while on nature walks and enjoyed working the daily crossword puzzles with her husband, Don.

Lynn was a loving mother, devoted wife, faithful sister and friend to many.  She always offered kind hospitality and served as a mother figure to so many of her children’s friends.  Lynn had a strong faith in her heavenly father, which she relied upon during her long battle with cancer.

Born in 1950, Lynn was the daughter of Graham Humphreys and Vivian Hall Humphreys of Big Island, Virginia.

She graduated from Liberty High School and attended Lynchburg General Hospital School of Nursing. While in high school, Lynn enjoyed playing basketball and remained a lifelong sports fan. She continued to enjoy softball during her career as a nurse and enjoyed watching her children follow in her love of sports.  Lynn served as a registered nurse with Lynchburg General Hospital for more than 40 years, working in Labor and Delivery and ending her career in the Surgicare department.

While working as a nurse, she met the love of her life, Donald Harris. The couple married in September 1972 and later moved to Forest, Virginia. Don and Lynn raised three children together and were married almost 49 years.