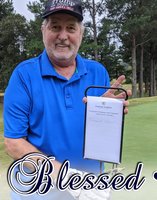 Torrance Morgan Hedrick “Legs”, 68, of Lynch Station passed away Tuesday, October 6, 2020 surrounded by his loved ones while in the loving care of the Salem Veterans Medical Center in Salem, Va. Torrance was born August 5, 1952 in Alta Vista, VA to Morgan and Eva Hedrick. He was retired from Moore’s Electric.

He is preceded in death by his father, Morgan Hedrick, sister-in-law, Nora Hedrick, and niece Melissa Hedrick and honorary son, Mark Wishon.

Torrance was an Army veteran. His Vietnam Buddies are Jim Rosenbaum of Virginia, Dan Schmidt of North Dakota, and Gerald Kubsch of Texas, they all served in the same company together and reconnected years later to become even better friends than in their youth. Gerald and Torrance were able to reconnect year’s later through Facebook and had their reunion at the Alamo.

Torrance’s happy place was Mt. Airy, NC. When he retired his plan was to golf every day. He enjoyed playing golf at Hat Creek Golf Club with friends.  He was an avid fisherman and enjoyed exploring the different rivers, creeks, streams, and lakes in Virginia. In recent years one of his biggest enjoyments was navigating the internet on social media sites making friends. Torrance had a heart of gold and enjoyed helping out everyone he encountered. He loved to fiddle and tinker with things and usually had several projects going on all at once. He believed family came first and always made sure they felt that way. He was a proud supporter of the NRA. To Emmett and all of his card playing buddies Cecilia is still ringing my phone.

During his life he enjoyed singing with the group Solid Rock, and a gospel group from Lynchburg, VA.  They traveled all over the US singing and sharing God’s word.

In lieu of flowers the family asks that donations be made to the International Myeloma Foundation, 12650 Riverside Drive, Suite 206 North Hollywood, CA 91607.