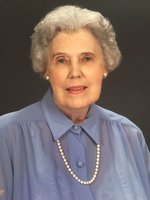 Evelyn Stevens Price Taylor, 93, of Lynchburg, Virginia, died Sunday, June 30, 2019, at Westminster Canterbury.  She was the wife of the late Daniel Lee Taylor, III.  They were married for 67 years.  She was born on March 25, 1926 in Lynchburg, Virginia, the daughter of the late Withers F. Price and the late Evelyn Stevens Price.  She was educated in the Lynchburg Public School System and was a graduate of Randolph-Macon Woman’s College.  She was a long-time active member of the Peakland United Methodist Church and the Cordel Crist Circle.

She is survived by her son, Christopher P. Taylor and his wife, Judy, of Forest, Virginia, and son Charles L. Taylor of Norfolk, Virginia, two granddaughters, Jennifer Martin of Holly Springs, North Carolina, Shannon Bing of Richmond, Virginia, and one grandson, Andy Bing, and one great-granddaughter, Grace Martin of Holly Springs, North Carolina.  She was preceded in death by one brother, Parham Thomas Price.

In lieu of flowers, memorial contributions may be made to Peakland United Methodist Church or the Fellowship Fund at Westminster Canterbury.  Her family offers sincere gratitude to the fifth-floor staff at the Hearthside Building at Westminster Canterbury and Gentle Shepherd Hospice for their kind and compassionate care of Mrs. Taylor.  Diuguid Wiggington Funeral Services in charge of arrangements.