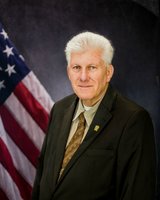 Born March 23, 1944 in Lynchburg, Virginia, he was the son of the late Brown Leftwich and Helen Tankersley Leftwich

His mother, Helen, was a school teacher and instilled a love of learning into Bob at a young age. After receiving his GED, Bob went on to work for the Campbell County Sheriff’s Office and Lynchburg Police Department. He would work his way up and eventually move on to becoming an Advisor to life long friend Sheriff Mike Brown at the Bedford County Sheriff’s office. Bob is a direct descendant of Capt. Uriah Leftwich (1748-1838), who was a brother of William, Thomas and Joel Leftwich who were all High Sheriffs of Bedford. Bob was also an extremely successful entrepreneur. Founding Allied Security Systems, INC in 1972, Bob built Allied up from a modest local base to a thriving company with clients stretched across the country.

As a natural problem solver, Bob quietly would work behind the scenes in many humanitarian efforts. After hurricane Katrina in 2005, he went to Gulf Port Mississippi to help out with the Hurricane Relief efforts. After living through Hurricane Camille, which effected Nelson County, he felt compelled to help out the victims of Katrina. Bob coordinated relief efforts that collected provisions to replenish the effected law enforcement departments. He also worked with Sheriff Mike and BCSO to send tractor trailers full of supplies down to the victims. Bob was also a Governor’s 20  Champion four times over, which was a shooting competition to determine the best in the state.

He is survived by his loving wife of 36 years, Jeannine Leftwich, daughter Julie East, grandsons Aaron and Colby Lawrence and granddaughter Gianna East.

Visitation will be held at Diuguid Funeral Home Timberlake Chapel Thursday June 27, 2019 from 6-8pm. A celebration of life will be conducted by Pastor Jonathan Falwell on Friday, June 28, 2019 at Thomas Road Baptist Church Pate Chapel at 2pm.

On-line condolences may be sent to www.diuguidfuneralservice.com.